To what extent does partial interval recording over-estimate prevalence?

It is well known that the partial interval recording procedure produces an over-estimate of the prevalence of a behavior. Here I will demonstrate how to use the ARPobservation package to study the extent of this bias. First though, I’ll need to define the terms prevalence and incidence and also take a detour through continuous duration recording.

Another characteristic of behavior that can be determined by the average event duration and average interim time is incidence, or the rate of event occurrence per unit of time. I’ll call incidence \(\zeta\) (“zeta”). In an alternating renewal process,

It can be shown mathematically that, on average, data produced by continuous duration recording (CDR) will be equal to the prevalence of the behavior. In statistical parlance, CDR data produces an unbiased estimate of prevalence. Since this is a mathematical fact, it’s a good idea to check that the software gives the same result (if it doesn’t, there must be something wrong with the code).

In order to simulate behavior streams, the software needs values for the average event duration and average interim time. But I want to think in terms of prevalence and incidence, so I’ll first pick a value for incidence. Say that a new behavioral event starts once per minute on average, so incidence (in events per second) would be \(\zeta = 1 / 60\). I’ll then vary prevalence across the range from zero to one. For each value of prevalence, I’ll generate 10 behavior streams (if you’d like to do more, go ahead!).

Two last elements are needed before I can get to the simulating: I need to decide what distributions to use for event durations and interim times, and I need to decide how long the observation session should last. To keep things simple, for the time being I’ll use exponential distributions. I’ll also suppose that we observe for 10 min = 600 s, so that on average we should observe 10 events per session. Now I can simulate a bunch of behavior streams and apply the CDR procedure to them.

To check that the CDR procedure is unbiased, I’ll plot the CDR data versus the true value of prevalence, and run a smoothing line through the cloud of data-points: 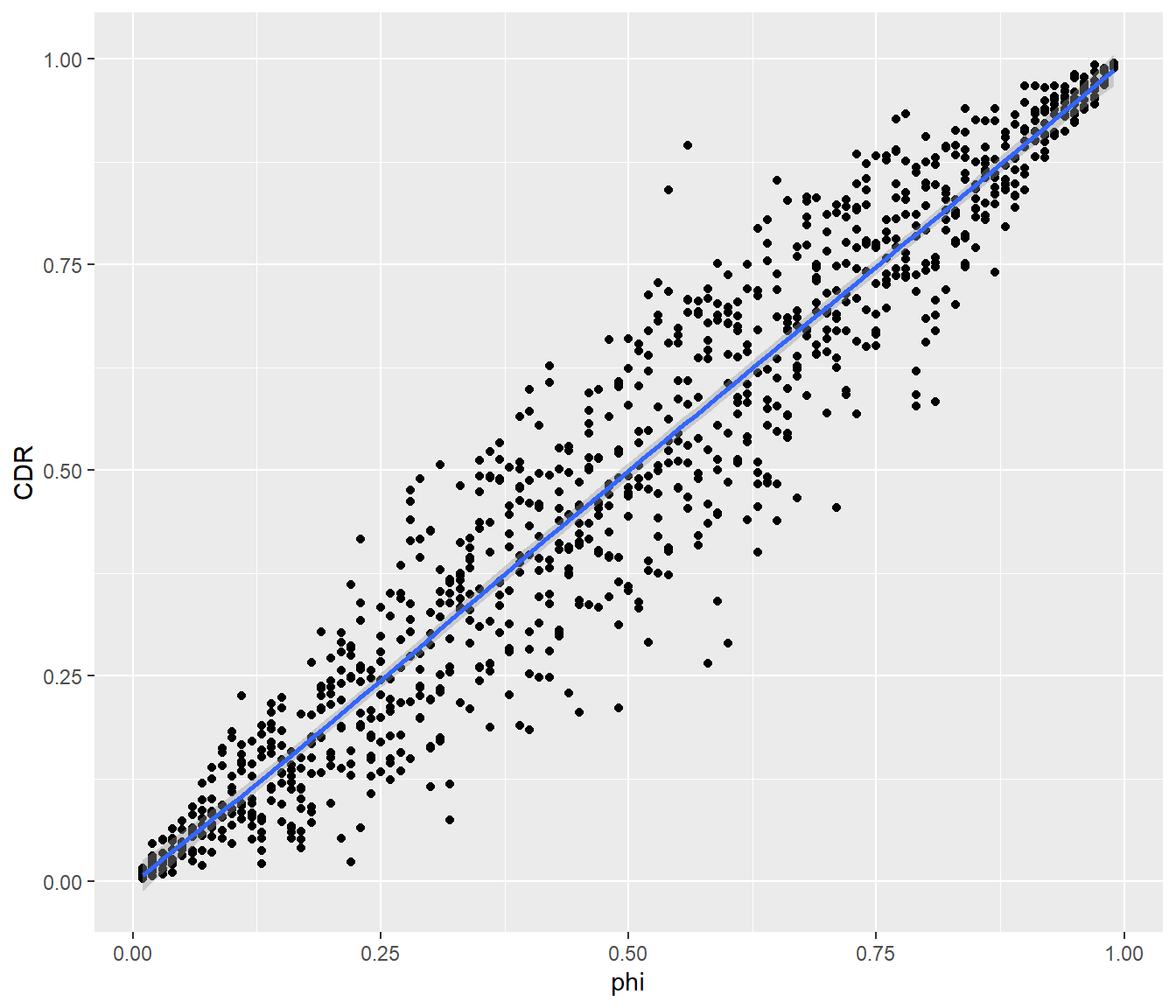 The blue line is nearly identical to the line y = x, meaning that the average of CDR data is equal to prevalence. Good news–the software appears to be working correctly!

Now to partial interval recording (PIR). There are two different ways to think about how PIR data over-estimates prevalence. The conventional statistical approach follows the same logic as above, comparing the average value of PIR data to the true value of prevalence, \(\phi\). Using the same simulated data streams as above, with 15 s intervals and 5 s of rest time after each interval… 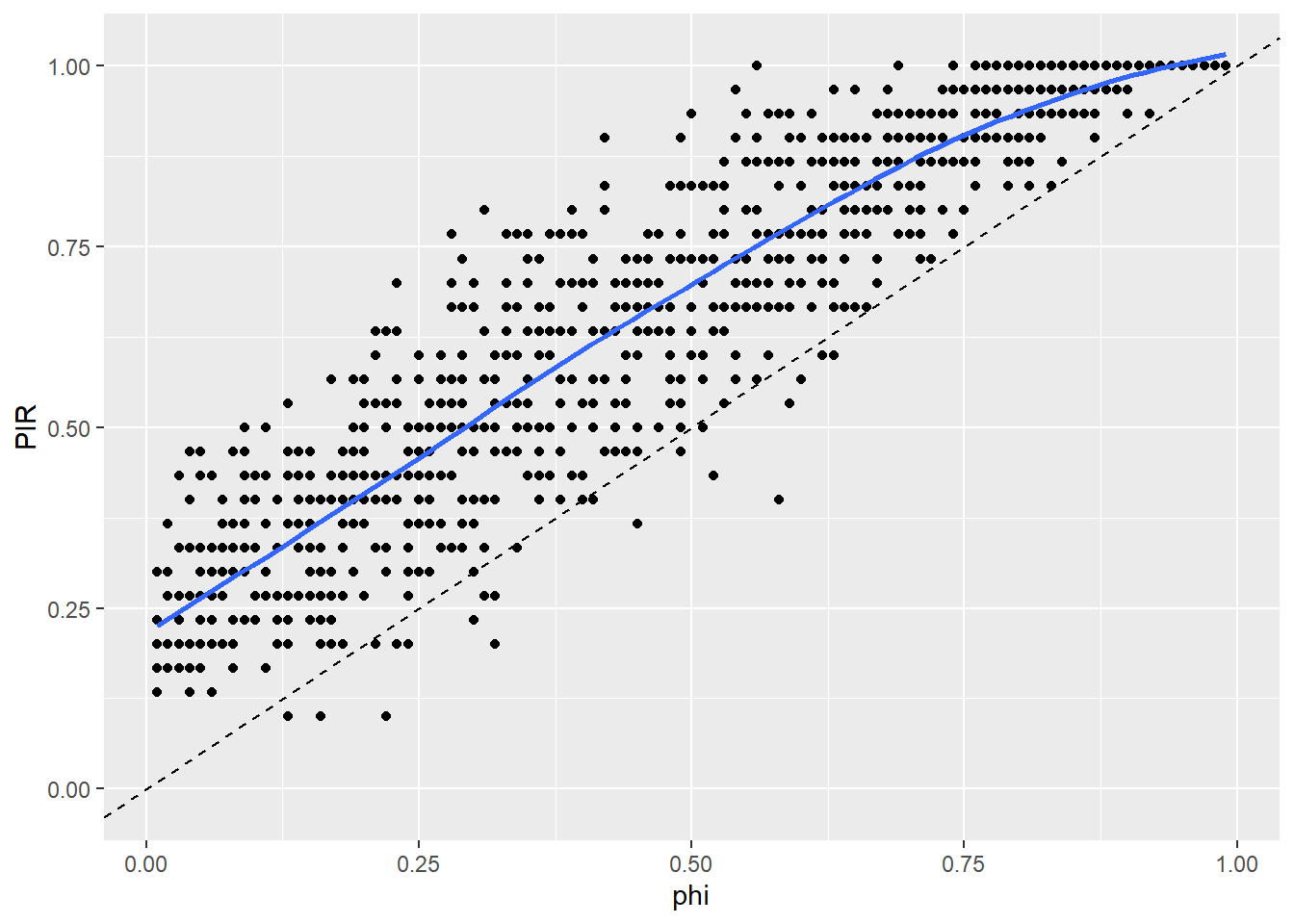 Previous studies in the Applied Behavior Analysis literature have taken a slightly different approach to thinking about over-estimation. Rather than comparing PIR data to the prevalence parameter \(\phi\), PIR data is instead compared to the sample value of prevalence, which is equivalent to the CDR proportion. Following this logic, I apply the PIR and CDR procedures to the same simulated behavior streams, then plot PIR versus CDR. 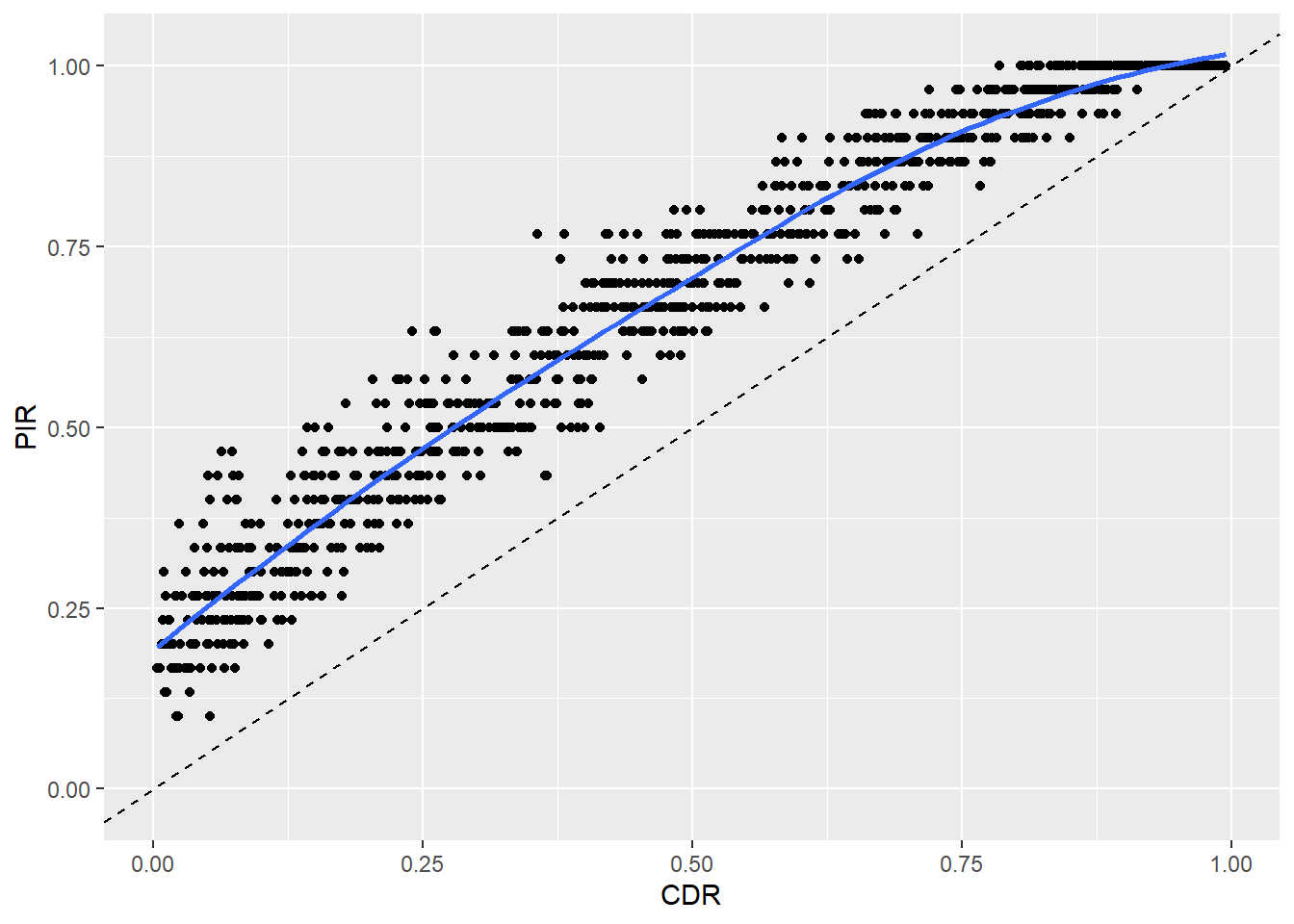 The blue fitted line is slightly different than with the other approach, but the general conclusion is the same: PIR data over-estimates prevalence.

But by how much? That’s actually a tricky question to answer, because the extent of the bias depends on a bunch of factors:

(Curiously enough, the bias doesn’t depend on the distribution of event durations F_mu.) 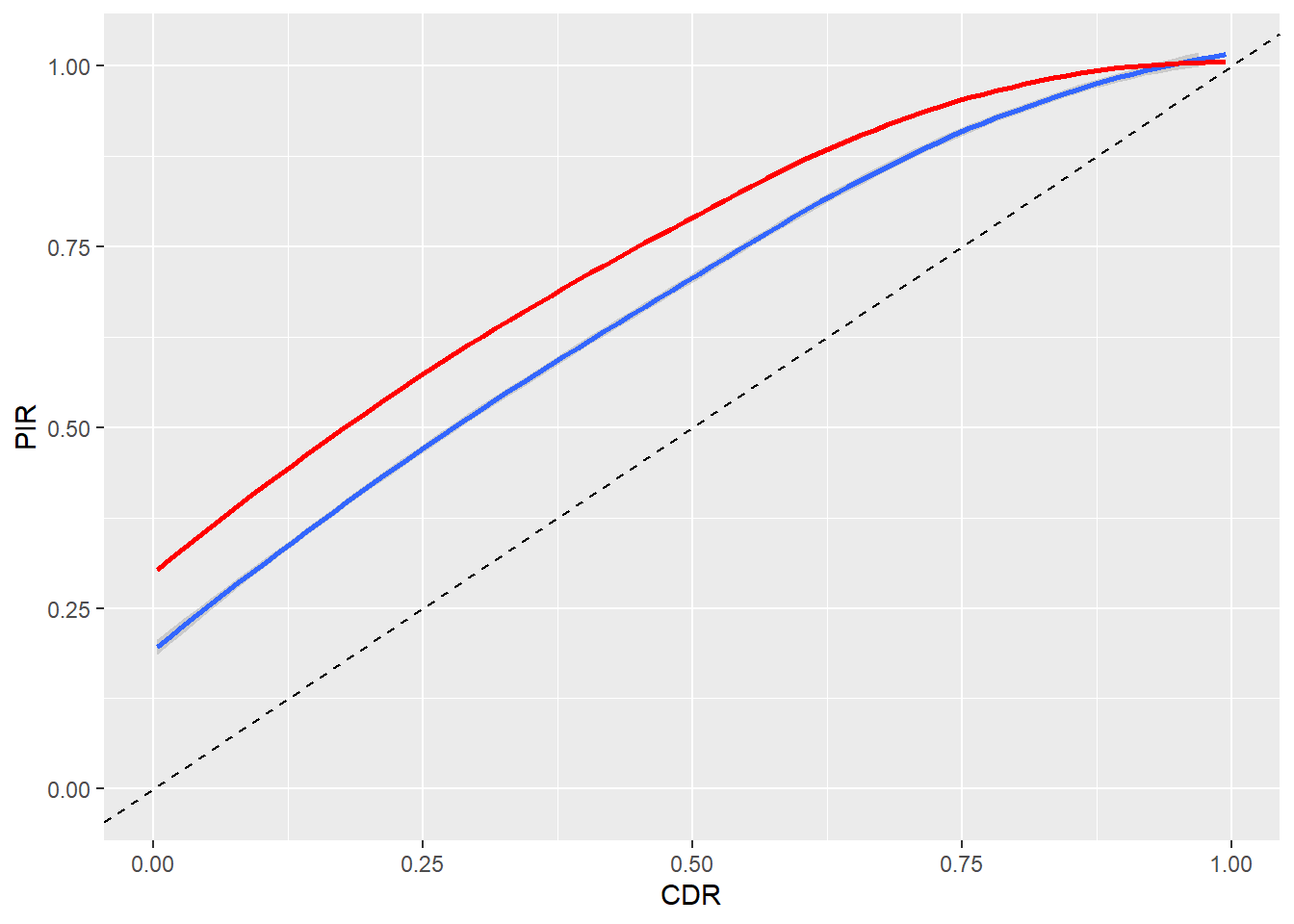 The red line indicates that the longer interval time leads to a larger degree of over-estimation. (For clarity, I’ve removed the points in the scatter-plot.)

It isn’t terribly troubling that the bias of PIR data depends on the interval length, because the observer will generally know (and will hopefully report in any write-up of their experiment) the interval length that was used. Much more troubling is the fact that the bias depends on the distribution of interim times, because this is something that the observer or analyst won’t usually have much information about. To see how this bias works, I’ll compare behavior streams generated using an exponential distribution for the interim times with thos generated using a gamma distribution with shape parameter 3 (this distribution is much less dispersed than the exponential). 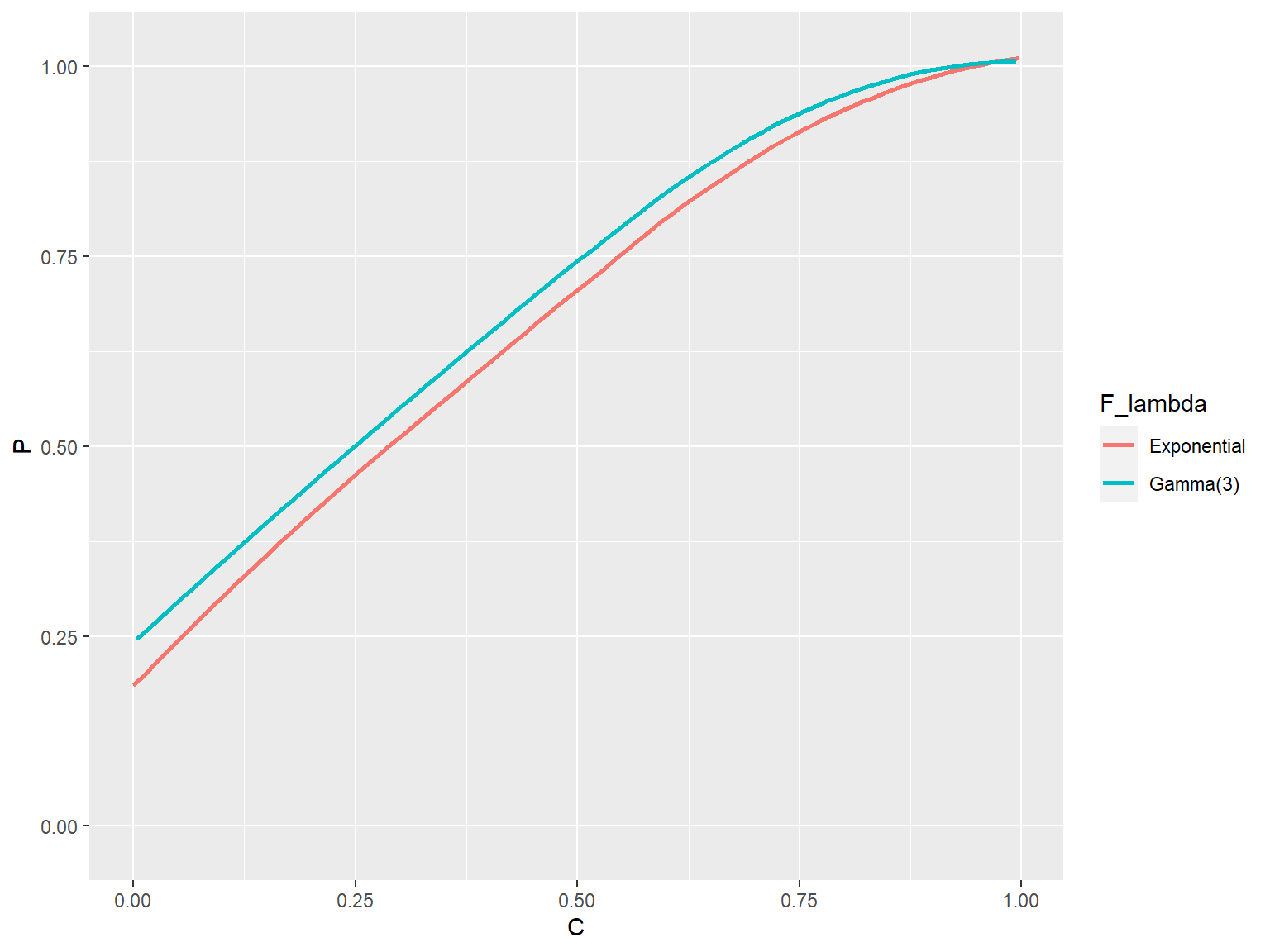