Regression discontinuities with covariate interactions in the rdd package

The rdd package in R provides a set of methods for analysis of regression discontinuity designs (RDDs), including methods to estimate marginal average treatment effects by local linear regression. I was working with the package recently and obtained some rather counter-intuitive treatment effect estimates in a sharp RDD model. After digging around a bit, I found that my perplexing results were the result of a subtle issue of model specification. Namely, in models with additional covariates (beyond just the running variable, treatment indicator, and interaction), the main estimation function in rdd uses a specification in which covariates are always interacted with the treatment indicator. In this post, I’ll demonstrate the issue and comment on potential work-arounds.

To make things more concrete, here’s a hypothetical RDD. I’ll use \(R\) to denote the running variable, with the threshold set at zero; \(T\) for the treatment indicator; and \(Y\) for the outcome. \(X_1\) is a continuous covariate that is correlated with \(R\). \(X_2\) is a categorical covariate with four levels that is independent of \(X_1\) and \(R\). In order to illustrate the issue with covariate-by-treatment interactions, I use a model in which the effect of the treatment varies with \(R\), \(X_1\), and \(X_2\):

The main estimand in a sharp RDD is the marginal average treatment effect (MATE)—that is, the average effect of treatment assignment for units right at/near the threshold of eligibility. Even though I simulated a treatment response surface that depends on the covariates \(X_1,X_2\), it is not necessary to control for them in order to identify the MATE. Rather, it is sufficient to use a local linear regression of the outcome on the running variable, treatment indicator, and their interaction:

Typically, this regression is estimated using the observations within a certain bandwidth of the threshold, and using weights defined on the basis of some kernel. The default in the rdd package is to use a triangular edge kernel, with bandwidth chosen using a formula proposed by Imbens and Kalyanaraman. The following code uses rdd to estimate the MATE without controlling for covariates:

Using a bandwidth of 1.09, the estimated marginal average treatment effect is 0.303. The figure below illustrates the discontinuity: 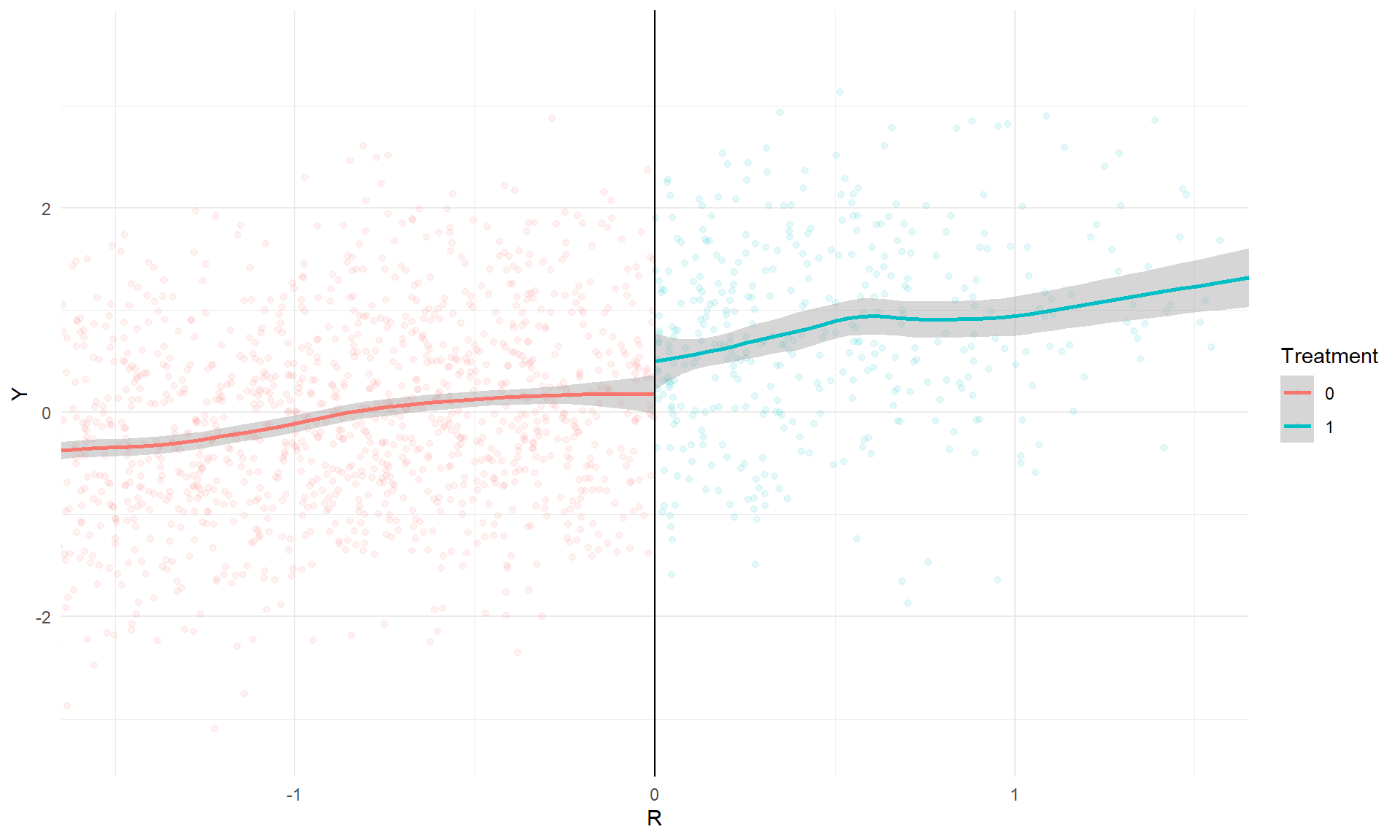 In practice, it is quite common for analysts to include additional covariates in the model specification. Doing so is not necessary for treatment effect identification, but can be useful for purposes of improving precision. For example, Cortes, Goodman, and Nomi (2015) use an RDD to estimate the effects of assigning low-performing 9th graders to double-dose algebra. Their main specifications include controls for student gender, race/ethnicity, free/reduced-price lunch status, etc. In the analysis that I’m working on, the data come from students nested within multiple schools, and so it seems sensible to include fixed effects for each school. There’s a direct analogy here to simple randomized experiments: the basic difference in means provides a randomization-unbiased estimate of the sample average treatment effect, but in practice it can be awfully useful to use an estimate from a model with additional covariates.

Returning to my simulated example, the following table reports the estimates generated by RDestimate when controlling for neither, one, or both covariates.

Despite using identical bandwidths, the estimates are drastically different from each other, with standard errors that are much larger than for the simple estimate without covariates.

It is known that introducing covariates into an RDD analysis should have little effect on the MATE estimate (see, e.g., Lee and Lemieux, 2010). It is therefore quite perplexing that the estimates in my example (and in the real study I was analyzing) were so sensitive. It turns out that this puzzling behavior arises because, for sharp RDDs only, RDestimate always interacts the covariate(s) with the treatment indicator. Here is the relevant section of the function:

For a generic covariate \(X\), the function uses the specification:

while still taking \(\beta_2\) to represent the MATE. This is problematic because, as soon as the \(X_i T_i\) term is introduced into the model, \(\beta_2\) represents the difference between treated and untreated units at the threshold (where \(R_i = 0\)) and where \(X_i = 0\). Thus, including the \(X_1\) interaction in the model means that \(\beta_2\) is a difference extrapolated way outside the support of the data, as in the following scatterplot of the outcome versus the covariate \(X_1\): 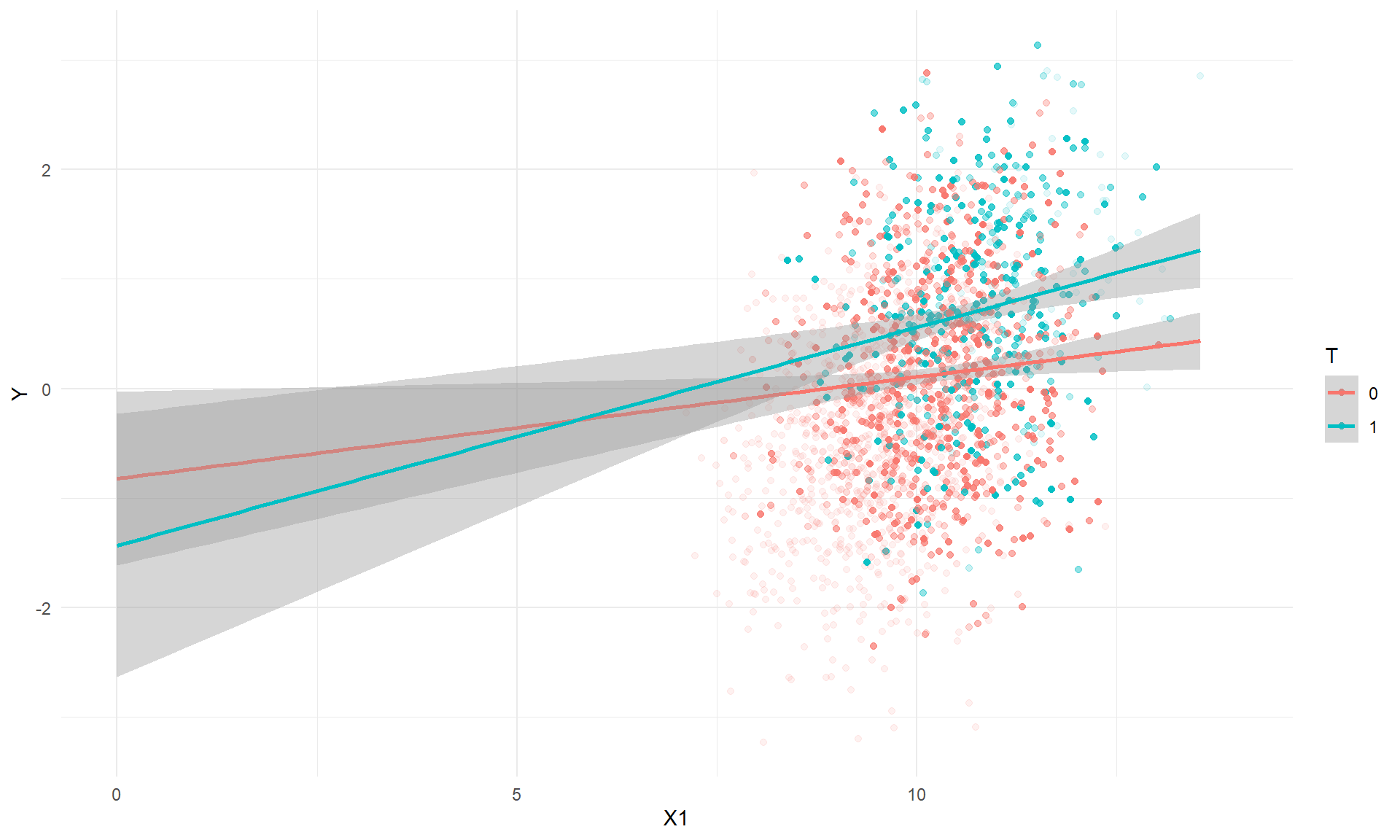 RDestimate returns as the MATE estimate the difference between the regression lines when \(X_1 = 0\), which in this example is -0.69. Similarly, including the \(X_2\) interaction in the model means that \(\beta_2\) will represent the marginal average treatment effect for only one of the categories of \(X_2\), rather than as some sort of average across all four categories.

What to do about this

If you’ve been using the rdd package to analyze your data, I can think of a couple of ways to handle this issue, depending on whether you want to use a model that interacts the covariates with the treatment indicator. Here are some options:

First, suppose that you want to estimate a model that does NOT include covariate-by-treatment interactions. The most transparent (and thus probably safest) approach is to do the estimation “by hand,” so to speak. Specifically, Use the rdd package to get kernel weights, but then estimate the outcome model using plain-old lm. Here’s an example:

By default, RDestimate uses the HC1 variant of heteroskedasticity-robust standard errors. To exactly replicate its behavior, I used coeftest from the lmtest package, combined with vcovHC from the sandwich package. Note that it is also necessary to estimate the model based on the subset of observations with positive weight (otherwise the sandwich standard errors will misbehave).

An alternative to the first approach is to “trick” RDestimate into using the desired model specification by using 2SLS estimation with \(T\) instrumenting itself. Because the function does not use covariate-by-treatment interactions for “fuzzy” RDDs, you get the correct model specification:

The results based on the first bandwidth agree with the results from lm.

Now, suppose that you DO want to retain the covariate-by-treatment interactions in the model, while also estimating the MATE. To do this, you can use what I call “the centering trick,” which entails centering each covariate at the sample average (in this case, the locally-weighted sample average). For a generic covariate \(X\), let

where \(w_i\) is the kernel weight for unit \(i\). Then estimate the model

The coefficient on \(T\) now corresponds to the MATE. Here’s R code that implements this approach:

Why does this third approach work? I’ll explain more in a later post…